(You'll pick your shipping method in the next step) 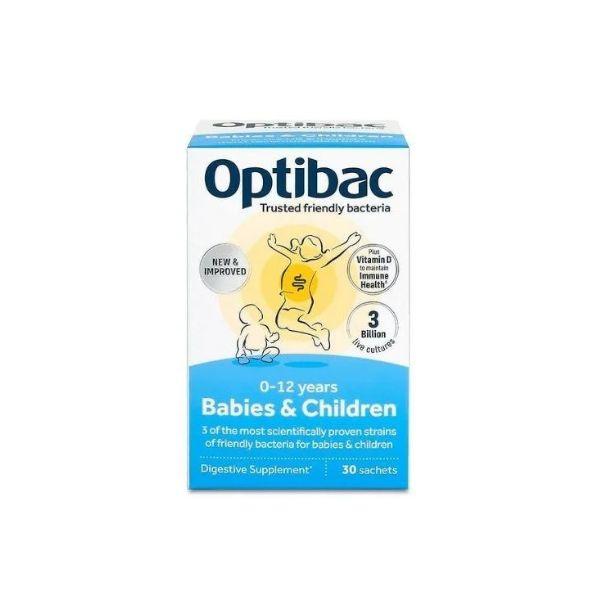 We’re sorry we’re out of stock, but we can let you know as soon as this product becomes available again.

Enter your details below and we’ll email you once this item is back in stock.

• Free from sugars, artificial flavours & colourings which often can be found in other children's supplements that contain live cultures.

•  For infants & children from birth to 12 years, and for pregnant & breastfeeding women.

•  Infants from birth to 3 years: Take one sachet per day or as professionally directed.

•  Children 4 to 12 years: Take 1 - 2 sachets per day as needed or as professionally directed.

•  Pregnant and breastfeeding mothers: Take one sachet per day or as professionally directed.

•  For best results, take with breakfast.

The types of natural bacteria that reside in an infant’s or child’s intestines are very different from the types found in adulthood. Bifidobacterium infantis and Bifidobacterium bifidum are the dominant and most important beneficial cultures found in healthy infants and children during their early years; this product contains both of these bacteria, in strains which have been tested to survive stomach acidity and bile salts. This supplement contains a third type of natural bacteria,

Lactobacillus acidophilus Rosell-52, which has been scientifically shown to survive stomach acidity and to reach the gut alive. At OptiBac we appreciate the importance of using various species and strains of natural bacteria – these three strains will target different areas of the gut as opposed to just one. Fructooligosaccharides (FOS), makes this product naturally high in fibre.

Having an imbalance of good and bad bacteria in the gut is thought, by some, to be related to digestion and immunity for infants and children, in particular in: formula-fed babies, babies and children on antibiotics, babies delivered be Caesarean section, children with regular colds and flus, and babies & children with digestive problems such as colic, diarrhoea, constipation and lactose intolerance, as well as those with allergies and skin irritations such as eczema.